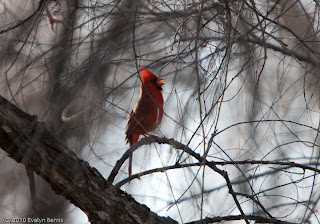 My mother and I decided to hit the road in New Mexico for a few days, looking for warmer weather than we had been enjoying (?) in Santa Fe. My mom Lisa Bemis is a watercolorist, so she was eager to find old cars, old houses, young or old sheep, sleeping dogs, horses on the hillsides and other bits of interesting scenery to paint.

I am a photographer and I love unpopulated places, horses of any sort, great light, and a few birds thrown into the mix.

We thought southern New Mexico would hold all of the above and we were right, except for the warmer weather part. It turned out to be a little early for sitting outside painting and migratory species were not in abundance but the beauty of a road trip is that if you don't like what you are seeing you can get in the car and go somewhere else. Or to quote one of my favorite Yogi Berrism, if you don't know where you're going you might not get there.


Our first day took us to the little bumps along State Road 52 that constitute Cuchillo, Winston and Chloride. I especially liked the sense of humor displayed in the former mining town of Chloride, as evidenced by this image: 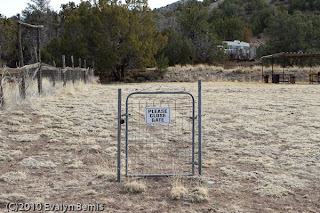 We spent that night in Truth or Consequences. When our first pick of lodging proved to be full (on a Monday night! in TorC!) we discovered the Birch Street Retreat run by Roger and Ann Swanson. They were very welcoming and we knew we were in good hands once we met their two dogs. They gave us a recommendation for dining, supplied a pass for a hot springs pool, and even whipped up blueberry smoothies for breakfast. To make a reservation, visit http://www.birchstreetretreat.com/


We had a great pizza and shared a bottle of Stella Artois at BellaLuca Cafe, set in a converted warehouse. You can tell the food is going to be good by the number of cars in the parking lot. Following dinner, I headed down to the Riverbend Hot Springs. I had my own private pool alongside the bank of the Rio Grande. It was utterly serene and quiet, with the 108-degree water flowing over the edge of the pool down into the river below. I floated around looking up at the moon and stars. All this for $12/hr. http://www.riverbendhotsprings.com/ 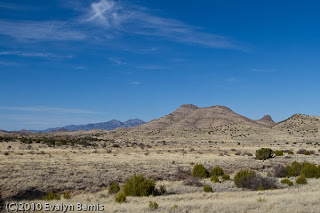 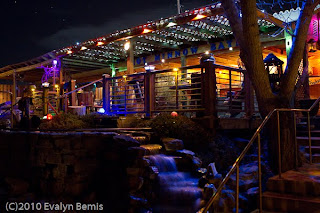 I was up at first light, wondering what birds I might see near the rio. There were Turkey Vultures in the cottonwoods, waiting for sunlight to warm their backs. A big flock of Cedar Waxwings flew in and out of a globe willow. Ring-necked Ducks, Mallard pairs and Coots paddled at water's edge. Western Bluebirds abounded, already bright in breeding plumage. 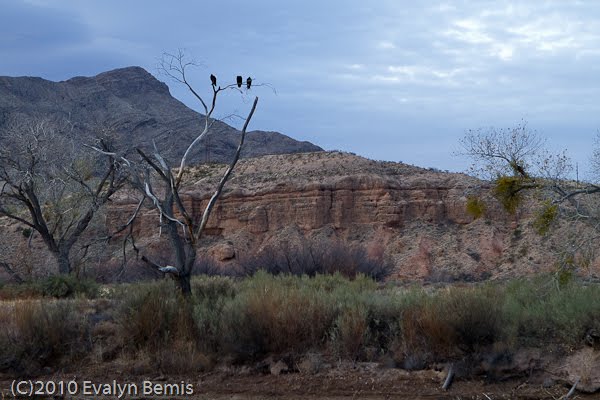 We lit out for Silver City, turning off I-25 onto Highway 152. Our first point-of-interest was Hillsboro, another in a series of old mining towns. We met Jim and Molly (man's best friend) and wandered around the side streets. We got a cup of coffee from the grumpy waitress at the one small cafe. My brother David would love the array of old vehicles falling to pieces in people's backyards. 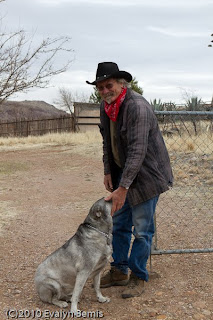 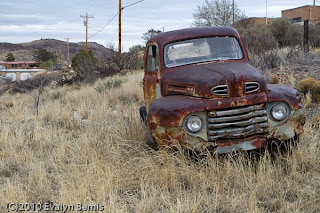 The bird life was pretty quiet on a March day that threatened rain. The best thing I saw was a Curved Bill Thrasher making a nest in a cholla cactus.

We were excited to come upon a small flock of Southwestern Turkeys as we continued towards Silver City. There were six of them, climbing the slope into a stand of Ponderosas. We also found lots of ducks at Bear Lake near Mimbres, including Buffleheads, Common Mergansers, Cinnamon and Green-winged Teal. At least one Roadrunner crossed our path, faster than a speeding bullet. A mule deer stood and watched us before turning tail and bounding away.

Highway 152 becomes the National Scenic Byway 180. Not so scenic but fascinating nonetheless is the Santa Rita mine, the source of much of Silver City's wealth in past years and still being operated today. 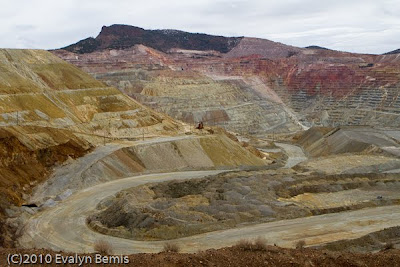 We opted for the Palace Hotel in downtown Silver City for our rest stop the second night. It is quaint, with creaky floors and old bathroom fixtures, but clean, quiet, and with free Wifi. The price was right at $65 for two. Silver City has a thriving arts community, with lots of galleries, restaurants (Shevek's for dinner ****) and a museum. Be sure to stock up on knitting supplies at Yada Yada Yarns or buy a hat made with alpaca wool by former Santa Fean Suzi Calhoun. 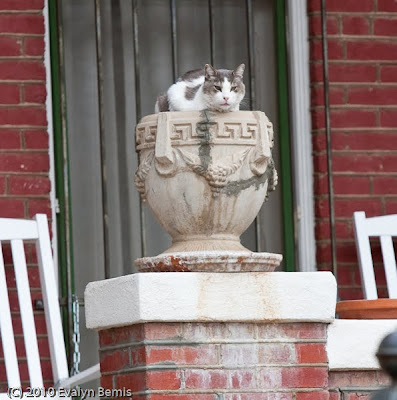 We had not found quite what we were looking for in Silver City so we rambled on in the morning, heading for the Gila River and its well-known birding country. I saw a Vermillion Flycatcher in almost the identical spot as I had last seen one 15 years ago there. Mom found something suitable to paint so we were both happy.

There was still snow on the peaks of the Mogollon Mountains. This made a nice backdrop to the hint of color beginning to come into the trees and pastures and there was high water in the rivers and creeks.

In tiny Glenwood we found lodging at Polly Tipton's Double T Homestead. We loved seeing the horses and mini burros in Polly's corral but had a hard time with the dead mouse smell coming from somewhere in our cabin. Oh well, part of the "charm" of being out in the country, right.? 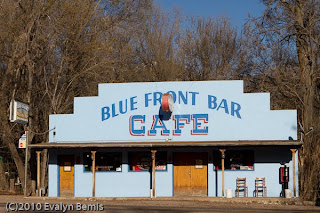 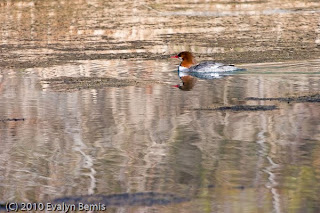 The dodgey smell was made up for by the presence of an Acorn Woodpecker just outside the cabin door and the fact that we were a short walk from both the Blue Front Bar + Cafe and the Glenwood Trout Hatchery. The first provided sustenance in the form of green chile enchiladas and the second provided birds, including a Cardinal, a Kingfisher, Widgeons, Grebes and more.

We struck out in the morning for the ghost town of Mogollon. It is about a nine mile climb up into the mountains to get to the former mining town. A few brave souls still live there on a full-time basis in fixed up cabins and homes. Somebody was even living in an old school bus that had been retrofitted with solar panels. Tufted-earred squirrels zipped up and down the pine trees and Stellar Jays sqawked loudly at a feeder.

Two miles after leaving Mogollon to head back to Highway 180, we turned through a gate and drove down a bumpy road to the home of Super Salve. All sorts of wonderful natural salves, creams and lotions are made by Denise Cowan, a trained Clinical Herbologist. We slathered on several samples and left with a great goody bag of magical potions. Check out their website: http://www.supersalve.com/ 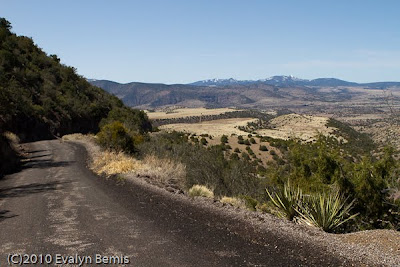 View from 159 coming down from Mogollon

We turned north on 180, driving through the Blue Range Wilderness where the Mexican Gray Wolf is struggling to be re-gain a foothold in its original habitat. We would have given anything to see wolves or hear them howl but all we saw which made us howling mad were a bunch of anti-wolf billboards. Catron County is not wolf-friendly, to say the least, and we didn't linger long there. But we were thrilled to come upon a more sympathetic feeling once we reached Magdalena, in the form of a hand-painted sign on someone's backyard fence. 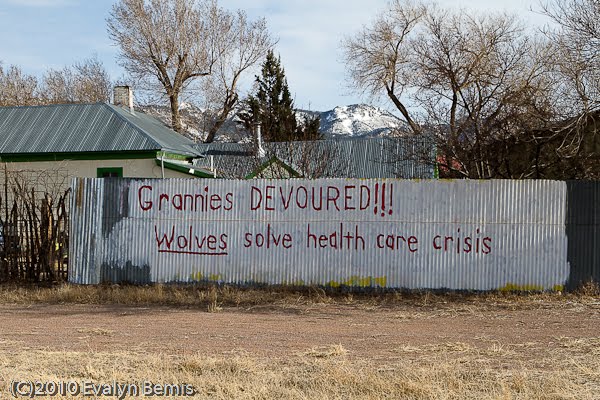 We spent the night in Socorro, choosing the plain but predictable Motel 6 - no burros but no dead mice either. The Socooro Springs Brewery was a great place for dinner (http://www.socorrosprings.com/) and we topped off two tasty salads with locally-brewed Pale Ale.

We found the usual suspects in the way of birds but also saw Ring-billed Gulls in the newly-irrigated fields, Say's Phoebes returned from their winter haunts, and Bank Swallows flitting along the Rio Grande.

The next day we made the last excursion of our trip, detouring west from I-25 to Highway 6 to I-40 and then about 20 miles to the exit for Acoma. I had never been to Acoma but unfortunately the wind came up and made our tour of the ancient mesa-top pueblo a gritty one. 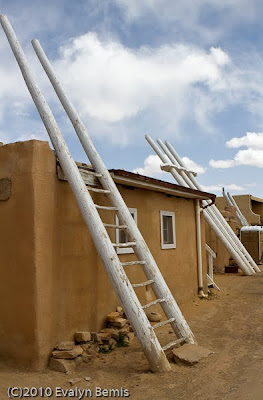 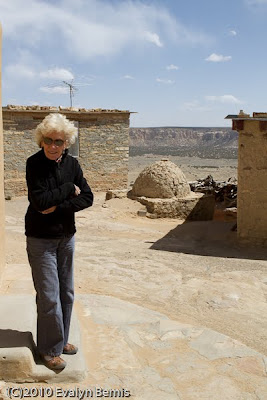 We found useful information at http://www.oldwestcountry.com/ for our trip and also picked up a publication called Forever Frontier put out by the Glenwood Gazette. It has maps galore. The website has a calendar of events worth checking out - sadly we missed the Dutch Oven Bake-off by not planning ahead! http://www.foreverfrontier.com/.

To view a slideshow with more images, visit my website http://www.evalynbemisphotography.com/ and click on Silver City and Beyond.

To check out Lisa Bemis's watercolors, go to http://www.scarlettsgallery.com/index.cfm and click on her name.
Posted by Evalyn Bemis at 11:53 AM